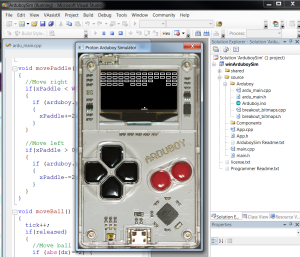 Play its HTML5 export in a browser here.

It's a harness to run code written for the Arduboy in Visual C++ 2005. It fakes the Arduboy API (Both V1.1 and V1.2 of the Arduboy library) so I can test and debug my stuff in my favorite development environment. The identical code can then be run on the real Arduboy.