This app combines the features of the previous apps with the powerful 3D engine Irrlicht.

It's based on the Irrlicht GLES 1.7.1 beta branch.

Key points about how I integrated it:

There is a lot of overlap between Irrlicht and Proton, for instance, they both have file systems where you can mount a zip, font systems and Rect classes.

However, I don't mind too much, because it means for games that don't require 3D, Irrlicht doesn't have to be included at all. (RTBareBones and RTSimpleApp examples don't include a single Irrlicht file)

This tutorial assumes you already did this one, and this one. At least skim them or you won't know about building resources!

Should be a breeze, exactly the same as RTSimpleApp.

You do have to build resources first, by running RT3DApp/media/update_media.bat. It converts all jpg/png to .rttex files.

This cryptic line in the batch file does most of the compressing:

It's saying turn everything into 4444 raw files, stretch them to be power of two, and flip them vertically. It also compresses the final product with zlib, the filesizes of an .rttex are comparable to .png.

These textures will load on anything.

But let's say you are doing an iOS build, you should really use PowerVR's pvrtc format instead, it will save texture memory and might give you a few extra fps in performance.

In that case, you should comment out the above line and uncomment this one:

(a : in front of a .bat file line makes it comment btw, sort of like REM but won't display it while running)

Note that along with -pvrtc4 it adds the hilariously long flag -4444_if_not_square_or_too_big. This is because iOS HW cannot display non-square pvrtc4 files. Yeah, wow, huh?

Btw, if you run /shared/win/rtpack.exe without parms it will let you know all the parameters possible. 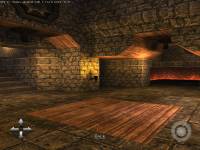 The main menu has multiple tests, the one above is a quake like map, it's loading a .bsp. It's all in

Check source/GUI/MapMenu.cpp for the code. 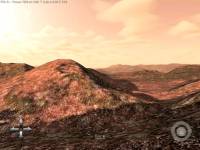 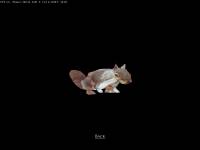 Loads and animates a simple model. Code is in source/GUI/Mesh3DMenu.cpp - if you look, you can uncomment some stuff to load a .md2 model and some others as well.

Akiko modeled that chipmunk for TeenageLawnmower waaaay back when. 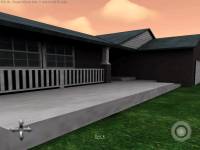 This is a .max file of a ground and house exported from 3DSMax as Blitz3D. (.b3d) The light mapping channel was applied in max and correctly exports with the mesh. Don't you love lightmapping?!

It also loads a separate .b3d file for the collision data, this lets you simplify it and make it so trees and things are smoother to navigate around.

Hmm, I probably should put up the .max file of the house scene as an example for 3DSMax users, bug me if you need it. :)

Does this mean I can pop out a 3d game now?

Uh… well, not really, these examples are just showing the technology works. You would really have to hit the Irrlicht Forums and understand what is going on to make a 3D game with this, there are no shortcuts.

Oh, they have nice tutorials as well. You can either use them with the vanilla Irrlicht distribution or with Proton SDK's version proving you use some common sense to ignore irrelevant pieces such as setting display modes.

If you're already familiar with 3D engine code in general, you'll like Irrlicht's design, it's clean and makes sense for the most part.